(This article originally featured on These Football Times, 15th May, 2016.) 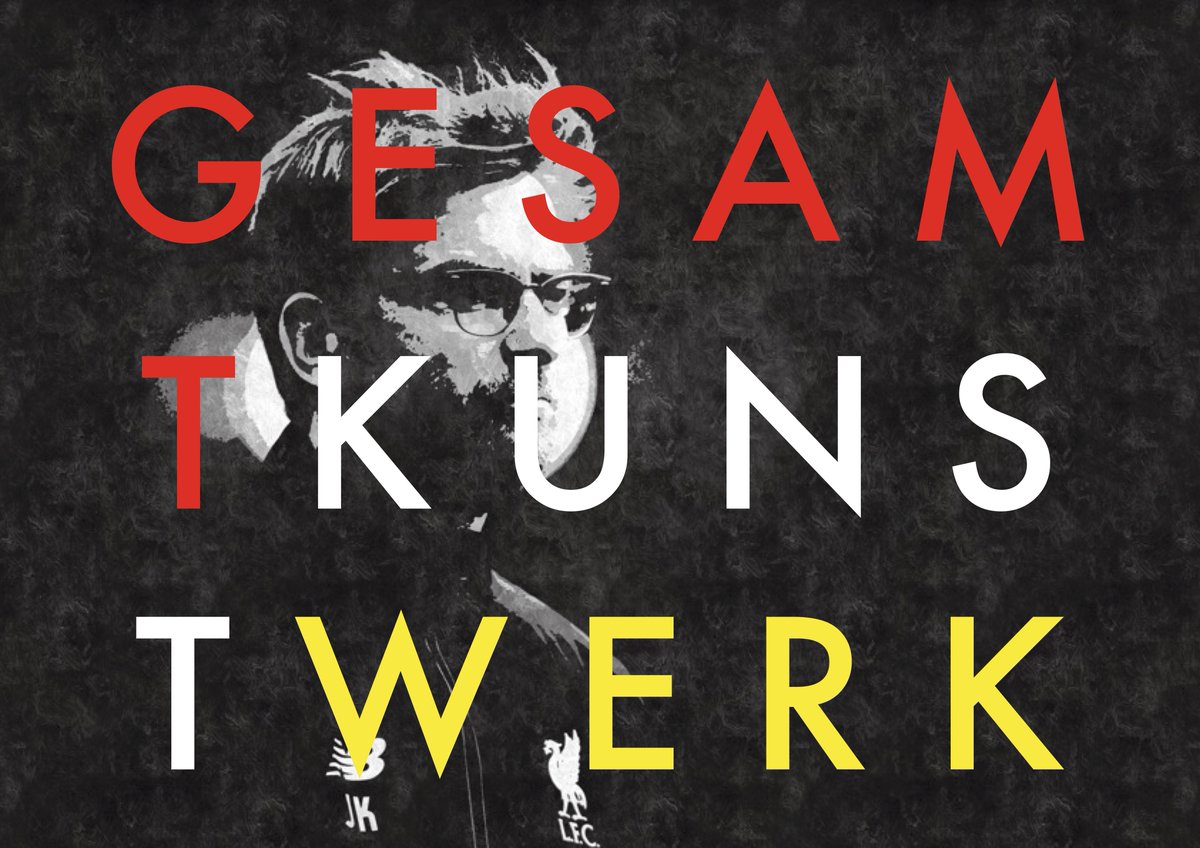 If you’ll forgive me for veering momentarily towards the preposterously pretentious, we must briefly visit the school of aesthetics. The philosophy of art and it’s borderless study of beauty and taste may appear needlessly decadent for a footballing tale, but bare with me. For it is within this subjects’ broad and deep parameters that we find recent acceptance and fashionable use of some intriguing German vocabulary.


Linguistically ‘gesamtkunstwerk’ might be the most German-sounding word in the German language. On paper it appears impossibly consonant-rich and of fear-inducing length. Monolingual folk or non-German speakers may fear dislocating their jaw at the word’s half-way mark.


As with many German words, an almost playfully beautiful meaning hides behind those brasen tones. Needless to say, there is no direct English translation. However, it has been agreed that gesamtkunstwerk is essentially a descriptor of a complete and total work of art, a synthetic product which uses several different art forms within its essence.

*   *   *   *   *
It is a mere seven months since Jürgen Klopp, the self-proclaimed ‘normal one’, enamoured himself to Liverpool fans, and appealed to an excitedly curious wider audience. Only in the duplicitous world of modern football could a man stick out like the proverbial sore thumb for being entirely normal.


And make no mistake, Klopp is normal. As a contrast to many of his peers, Klopp sees, thinks, does and speaks, as a mere mortal. In this season’s Premier League only Claudio Ranieri comes close to such admirable and lofty levels of groundedness. In differing styles Klopp and Ranieri delight by refusing to play the monotonous game of interview clichés, and their personalities have positively impacted their squads.


Totally and genuinely dumbfounded by the prolonged hype surrounding his October appointment, Klopp pleaded his simple wish to be left alone and begin his work. It is here that we find Klopp’s gesamtkunstwerk. Celebrating tackles like goals is part and parcel.


Work, and the individual endeavours of it’s process - is the ‘total art’ of Klopp and Liverpool.


At Anfield on Thursday May 5th 2016, this art was framed and mounted with a fitting backdrop. Amidst emotional and nostalgic hues, and a cacophonous soundtrack, Liverpool’s Europa League semi-final was gesamtkunstwerk in its purest form. Technically, it wasn’t the most polished display of football, and naivety hovered in the air. Fingernails may have been chewed upon, but Liverpool’s commitment was mesmerizing and relentless. Villarreal found themselves harried, pressed, and pressured within an inch of their lives.


The collective of a talented yet inconsistent goalkeeper, a valued though erratic defence, a midfield mix of frantic and fluent, and a forward line who flickered between ferocious and sublime, all cast aside their individual failings. They covered for one another, hunted in packs. Sheer work rate papered over cracks, hid the flaws, and allowed individual talents to shine. It clicked. The gesamtkunstwerk was far greater than the simple sum of their individual ability.


The bond and work rate implemented and lauded by Klopp is an art form.


Liverpool of the late-Rogers era were often labeled a team lacking identity. Faced with remnants of a squad struggling to replace Luis Suarez and Steven Gerrard, Klopp has found and installed real value in what lay in front of him.


The polarising Simon Mignolet: praised, trusted, and rewarded with a new contract. An often erratic backline have been allowed to make mistakes whilst being lauded for their qualities. In turn, mistakes are fewer and confidence is increasing. Similar examples can be found across the midfield, where injuries have meant enforced rotation has been another barrier.


Attack is where Klopp shows just how highly he values work rate. Christian Benteke has found himself out of favour, while the energetic and hungry Divock Origi has flourished. Caught somewhere between the two, and in more ways than one, Daniel Sturridge has patiently played his way back to fitness, and poses a healthy dilemma. The dance has been replaced as a goal celebration, and the wild-eyed outpouring of emotion appears to communicate he’s more than ‘on board’.


Domestically, Klopp has accepted the inconsistency of a team in transition. A process is a process, and transformation doesn’t come overnight. In the midst of an outlandishly unconventional Premier League season, Klopp and Liverpool have largely brushed aside their league table position. Blips such as the 3-0 reverse at Watford will punctuate the sides form for a while to come.


Arguably knock-out football is where the most accurate indicators of Liverpool under Klopp are to be found, and early signs look promising. Ringing to a tune somewhere between heavy metal and stadium rock, Liverpool have made their way to two cup finals since October. Their path hasn’t always been smooth.


By December ‘gegenpressing’ had misinformed pundits crying foul on Klopp the evil dictator. Prior to January’s FA Cup tie at Exeter, Liverpool had eleven first-team players out injured, 7 of which were suffering hamstring strains. Whilst slightly adapting his training methods, and tweaking the individual fitness training of each player, Klopp remained defiant and positive.


Gripes with English football’s bloated winter fixture list quickly diminished. Liverpool and Klopp took Exeter as an opportunity to lavish responsibility and value on to their youth and squad players. If a collective indulgence in hard graft is Klopp’s gesamtkunstwerk, what better practical lesson for a young footballer than a third round FA Cup tie at Exeter?


With a chill in the air, rain in the dark night sky, and pre-match interview in a very modest kitchen, Liverpool’s adventure on England’s south-coast could have gone either way. Despite less than a week of training, the impressionable youth and hungry squad players were already doctrinated.


Klopp’s man-management makes him an easy man to please. He requires no more than committed application. More importantly, though, Klopp exudes a personality which makes it easy for players to want to please him.


During an understandably stuttering performance, Klopp’s hastily assembled side had enough character to come from behind twice to secure a 2-2 draw at St James Park. Exeter were swept aside in the reply.


The 5-4 victory at Carrow Road and the Europa League quarter-final second-leg victory against Borussia Dortmund, are other examples of the same principles at play. Big victories snatched from the hands of defeat are only possible if a team never stops working.


Currently Liverpool are most likely a tactical design, a group of players, and a teamsheet some distance from Klopp’s ‘perfect XI’. However, they are a team who understand the basic yet powerful principles of gesamtkunstwerk, and thoroughly deserve all of their improbable victories. The Anfield faithful have good reason to be licking their lips at the prospect of Klopp’s Liverpool two or three years from now.


In another trait which appears on the contrary to many of his peers, and one that should delight Liverpool fans, Klopp appears to form a deep-rooted loyalty with his clubs. After all, one cannot preach benefits of work and long-term processes if they’re moving clubs every 3 years.


As a raw and awkwardly talented forward, and after three years of lower-league football with various clubs around Frankfurt, a twenty-three year-old Klopp signed for Mainz 05 in 1990. After 5 years he wasn’t so much converted, but rather reverted to the role a rugged defender. The position, and Klopp’s evident capacity to inspire those around him via sheer endeavour, hinted at leadership qualities to come.


In 2001, Klopp retired a one-club man, and was immediately appointed as Mainz 05’s new manager. The relationship moved to the next level, and remained fruitful for both parties. Klopp guided an unfancied Mainz 05 to their first Bundesliga promotion, and secured UEFA Cup qualification. The lows consisted of a relegation, and a subsequent failed attempt at swift promotion. Klopp resigned in May 2008, and was appointed Dortmund manager later that month.


Again seven years was the duration of his Dortmund love affair. Again, it was a tenure defined by unity, work, and the sheer hunger of beating the odds. Klopp famously took Dortmund to successive Bundesliga titles, a Champions League final, and a German Cup victory. These achievements were based upon two modest seasons of top six finishes as Klopp instilled his vision and gesamtkunstwerk, and sprinkled the squad with his own signings.


Exhausted and emotional after 318 matches in the Westfalenstadion dugout, Klopp embarked on the sabbatical which ultimately led to an Anfield appointment.


And so, on to Wednesday May 18th, and a shot at genuine continental glory in his first season in England. Considering Klopp’s positivity and ability to find value where there appears little, the cosy setting of Basel will play host to a fitting season finale.


In consistently valuing the Europa League, Klopp has endorsed a truism about the competition which is rarely recognised. The notion that the Europa League is only a valuable cup competition because it serves as a Champions League entrance ticket is absurd. As Klopp and his team have shown, and supporters have come to recognise, the Europa League is a valuable cup because it offers a platform for victory. A chance of success. A European final in it’s own right. It’s pregnant belly swells with moments of glory, waiting to burst out and be cherished.


Similar soundbytes were given in February prior to the League Cup final. Played out at the tail end of a long winter, the season’s first domestic cup final is rarely seen in a desirable light. The League Cup is a nuisance to clubs in the Champions League. It’s portrayed as a minor trophy of little significance.


Unsuccessful as they may have been against Manchester City, this tender Liverpool squad will have learnt several valuable lessons in the loss. For football purists of integrity, which is what Klopp is, lessons of added pathos and deeper value come in defeat. In years to come, one may argue that first the chance of silverware for Klopp’s Liverpool was a defining moment. Not because it was a celebration of winning together, but because of the sharp learning curves defeat produced.


As UEFA offered its standard advice to fans without tickets not to travel to the Europa League final, Klopp was again wonderfully off-message. His comments (which were since slightly re-defined) after the semi-final that traveling to Basel “is worth (going) even if you do not have a ticket to enjoy the city”, reaffirmed the powerful notion that the occasion is all encompassing. That moment of possible glory is of much higher value than any one individual. Gesamtkunstwerk is open to supporters, too.


In spurring on the Liverpool fans with such notions, Klopp creates a swell of interest, strength in number, and a boundless unity. As time passes, these messages affirm, and as long as performances continue to steadily improve, winning becomes a habit. Victory against Sevilla, and Klopp will see Liverpool just as ravenous for more. Defeat against Sevilla and gesamtkunstwerk will ensure Liverpool start next season all the more hungry.


Win or lose, the art is in the application.
Posted by Glenn No comments: