Sixfields Stadium, Northampton. Just off junction 15a of the M1, and built on the site of an old landfill, nestled in the midst of bland new housing developments, soulless chain restaurants, and under-used car-parks. Much like Northampton's old ground (which was shared with the cricket club), Sixfields currently consists of only three stands. Redevelopment plans stalled as a ten million pound loan mysteriously vanished, along with outgoing chairman, David Cardoza. With the exception of the remarkable work of current boss Chris Wilder and his side, and the heady memories of the late nineties, the naming of the 'Dave Bowen Stand' might just be the classiest thing about Sixfields Stadium.

The Dave Bowen Stand at Sixfields. Image from here.

As local heroes go, Dave Bowen wasn't local to Northamptonshire. Born in the Welsh rugby heartland of Glamorgan, Bowen moved to Northampton in the forties. For the boy who overcame rheumatic fever as a child, and won his first pair of football boots in a raffle, sporting success seemed unlikely. However, fast forward two decades to the middle of the swinging sixties, and Bowen had accomplished the eclectic claims to fame of marking a 17-year-old Pele at a World Cup, establishing himself in the first eleven for Northampton, Arsenal, and Wales, managing his country, and being the only manager to take Northampton Town to the top flight of English football.

Bowen enjoyed two spells playing for Northampton Town. The first of which was short-lived, and lent few clues to the legacy he would leave. He made his debut as a nineteen year old, initially as a winger, but soon reverted to what would become a familiar left-half position.

While completing National Service with the RAF, a somewhat chance encounter with Pat Whittaker opened the door for an Arsenal connection. Pat, son of then Arsenal manager, George Whittaker, was so impressed by this articulate, enthusiastic, and hugely likeable Welshman from Northampton, that he insisted his father take a closer look. Equally roused by Bowen, Whittaker Senior had Arsenal part with £1000, and Dave Bowen moved to Highbury in the summer of 1950.

Initially signed as cover for Pat Mercer at wing-half, Bowen took time to establish himself in top-flight football. While Arsenal won the league title in 1953, Bowen making only a handful of appearances. However, by 1954, Dave Bowen was an Arsenal regular, and he would remain so for the best part of the decade. Furthermore, Bowen made his international debut in '54, starting at wing-half as Yugoslavia defeated Wales 3-1 at Cardiff's Ninian Park.

Bowen went on to win nineteen caps for his country, four of which came at the 1958 World Cup. Held in Sweden, the tournament remains the only World Cup graced by Welsh presence, and captained by Bowen, they even made it out the groups. Three draws, 1-1 v Hungary, 0-0 v hosts Sweden, and 1-1 v Mexico saw Wales through on goal difference. Incidentally, England exited at the group stages with an identical record. At the quarterfinal, Wales were drawn against favourites Brazil, and gallantly, honourably, and somewhat inevitably, exited 1-0. Brazil's match winner that day in June 1958 was a seventeen year-old Pele, marked by Dave Bowen. 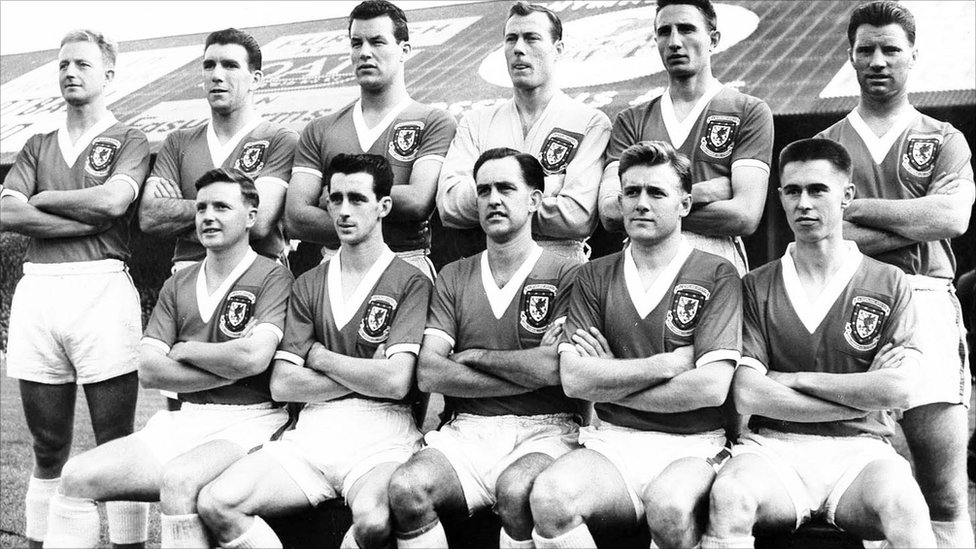 Wales face the camera at the 1958 World Cup in Sweden. Bowen centre of the bottom row. Image from here.


Along with countryman and goalkeeper, Jack Kelsey, Bowen became the first Arsenal player to appear at a World Cup. Despite the honour of captaining the club, Bowen's time at Arsenal coincided with a struggle to replicate the '53 league championship. After more international recognition, this time representing a London XI in the Inter-City Fairs Cup, Bowen transferred back to Northampton Town.

In 1959, the year of his final Wales cap, Bowen was appointed player/manager at the County Ground with the Cobblers threatening to climb from the football leagues bottom rung for the first time in their history. In Bowen's second full season, the Cobblers secured third place, and promotion to division three. Quickly earning a reputation for signing players of pedigree on a tight budget, Bowen oversaw the pinnacle of Northampton's modest history, and did something rather unique in professional football.

Following their 1961 promotion, the Cobblers claimed two further promotions in three years, and found themselves in English football's top-flight for the 1965/66 season. Despite Bowen switching roles to 'General Manager' by 1969, he is historically associated with the unique element to this remarkable rise. Even quicker than the transition from bottom tier to top tier, was the fall from modest grace. The 1969/70 campaign, on the back of three relegations in four years, saw Northampton Town line-up in division four. Right back where they started.

Consistently opportunistic and one to make the most of a possibility, Bowen managed the Welsh national team from 1964 till 1974. Not content with overseeing the fortunes of two football teams, Bowen also kept himself busy with successful sidelines in sports journalism and book-making. As Welsh manager, he never reached the heights of his playing career, but he did the next best thing. Namely, mess it up for England. The 1-1 draw at Wembley in January 1973 set the tone of failure for Alf Ramsey's England, and eventually led to a team containing Ray Clemence, Bobby Moore, Martin Chivers, Rodney Marsh, and Kevin Keegan, missing out on the 1974 World Cup.

As for Dave Bowen and Northampton Town, the connection ran deep. Bowen occupied the role of general manager, and then club secretary till 1985, and assumed responsibilities of club director upon retirement.

Dave Bowen for Arsenal, and perhaps Daz Ultra, circa 1956. Image from here.

Northampton Town departed their quirky County Ground in 1994, firmly planted in the football league's bottom tier. Tragically, Bowen died a year later, and never witnessed the electric atmosphere which poured from the Dave Bowen stand in the early summers of 1997 and 1998. Led by a manager Bowen himself would surely have admired, Ian Atkins, the Cobblers were once again famed for making the most of a low budget. Atkins went some way to replicate the meteorical rise of the sixties achieving two successive Play-Off finals, but fell at the final hurdle. However, the memory of the two semi-final second legs, over-turning a significant deficit against more illustrious opposition on both occasions, surely have to be the greatest events to unfold in-front of the Dave Bowen stand.

In three months time, Chris Wilder and the class of 2016 might just have something to say about that.
Posted by Glenn