Jimmy-Floyd Hasselbaink is a managerial rarity. He is, all at once, a young Dutch football manager (aged just forty-three), currently employed, and in the midst of a coaching career on an upward trajectory. 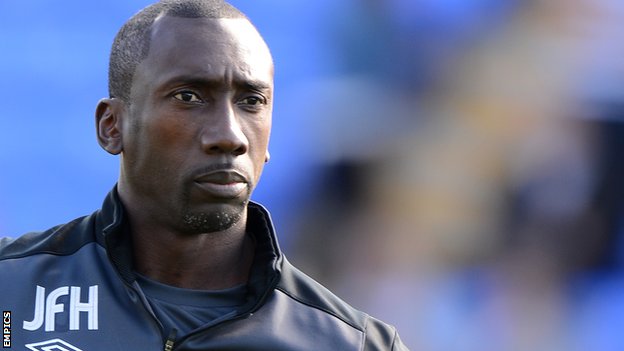 As loveable Jimmy rocked up at Burton Albion in just over a year ago, he added his name to a diverse, and only sometimes illustrious list of names. From the collected wisdom, trophy cabinet and philosophies of Louis Van Gaal, to the plucky sojourners such as Marinius Dijkhuizen at Brentford, all of whom carry something seductively attractive to club owners and directors the world over; the DNA of a Dutch football coach.

Dutch football coaches are known and appreciated the world over, but if the global tradition of classy, thoughtful, and largely successful leadership is to continue, further pretenders to the thrones of Louis Van Gaal, Guus Hiddink, and Dick Advocaat et al should surely be more prominent.

Two years senior to Hasselbaink, and with four Eredivisie championships in the past five years behind him, current Ajax manager Frank de Boer is surely leading the way for a new generation of Dutch managers. Treading a different path in a different country, Hasselbaink, isn't far behind in terms of drive, thought, and motivation.

Catching up to, and following footsteps trodden by the likes of Van Gaal, Hiddink and Advocaat may well be a sizeable task, let alone eventually filling their boots. Yet in terms of silverware, they're the Dutch standard bearers. Between them they've won a combined thirty-nine major trophies, both european and domestic, in five different countries. With Hiddink and Advocaat currently out of work and slipping towards retirement, only Van Gaal can add to that impressive haul of silverware. Though at sixty-four years of age Louis van Gaal himself is no spring chicken, and heirs to the throne are surprisingly hard to come by.

Having started his managerial career with second-tier Belgian club, Royal Antwerp, and then taken Burton Albion to their first ever league championship and promotion, and seeing them to the top of League One this week, Hasselbaink's career has started solidly. His move to West London, confirmed today, follows suit. QPR are a bigger club in a higher league, which means Jimmy-Floyd Hasselbaink and his coaching career are on the up.

Enjoying a coaching career on an upward trajectory cannot be said of another Dutch trio who've all relatively recently called time on their playing days. All comfortably under forty-five years of age, Edgar Davids, Clarence Seedorf, and Patrick Kluivert have all cut their managerial teeth, only to see their early careers somewhat stalled.

Both Davids and Seedorf are currently unemployed, both after a their first jobs in the dug out. In October 2012, Barnet pulled a coup by installing Edgar Davids as player/manager. Already living in north London, and managing Sunday League side Brixton United, Davids was initially hesitant to resume playing again, but went on to manage Barnet in League Two and the Conference Premier. Davids resigned in January 2014, and hasn't managed since. At the other end of quite a few footballing spectrums, January 2014 also saw Clarence Seedorf appointed as head coach of AC Milan. Known and respected as, il profesore, in Milano, Seedorf arrived to an expected wave of hype and positivity, which faded fast. Seedorf was replaced by Flippo Inzaghi just six months later. Like Davids, Seedorf hasn't managed since.

Bucking the trend and enjoying more than one job, Patrick Kluivert has learnt from some of the best, enjoying assistant roles to Louis van Gaal, Dick Advocaat, and Ronald Koeman with AZ Alkmaar, Wiljian Vloet at NEC Nijmegen, and Bart van Marwijk and Louis van Gaal with the Dutch national team. March 2015 saw Kluivert's first solo, leading role, as head coach of the Curacao national team. Despite leading the side to their best World Cup Qualifying campaign to date, Kluivert resigned in September this year. Like Davids and Seedorf, he is currently unemployed.

Widening the parameters to include Dutch managers hovering around the mid-fifties age bracket, one would expect the search for a successor to success to simplify. Yet still no-one comes close to the trophy collection and stature of the three wise men.

Marco van Basten, aged fifty-one, showed early promise after being installed as a novice national team manager, leading Oranje at the 2006 World Cup, and 2008 European Championships. However, trophy-less stints at Ajax and Heerenveen bookended a three-year job-less streak, and after cutting short his role as AZ Alkmaar head coach due to health reasons, van Basten is back in the national team set-up as assistant coach.

Going one better than early promise, and notching up early trophies and accolades, Frank Rijkaard is widely regarded as the man responsible for providing Barcelona with the foundation to their current domination. Rijkaard was just forty-one when he was appointed head coach at the Camp Nou, and after early jitters, Barcelona were nearing the relegation zone before Christmas, the club finished 2003/04 as La Liga runners-up, and have claimed major trophies ever since. Rijkaard departed a hero in 2008, and embarked on a sabbatical. Spells at Galatasaray, and the Saudi Arabia national team followed, but without the same intensity and success of his days in Catalan. Rijkaard has been out of employment since 2013.

Frank Rijkaard has a word in the shell of a young Lionel Messi. Image from here.

Not unlike Frank Rijkaard, Hasselbaink is displaying that delightfully Dutch trait of finding success abroad. Also in England, not too far from West London, two Dutch brothers are winning praise, if not trophies, on the south coast. Ronald Koeman, aged fifty-two, has been assisted by his older brother, Erwin, at premier league Southampton. Despite having forced hands sell their best players on an all too regular basis, the Koeman's have earned plaudits for attractive football, and making the most of a good scouting system. With heightened stability, and a bigger club with a bigger budget, the natural conclusion to draw is that trophies will come.

Sitting in a similar boat to Koeman, in calm and stable seas, yet a boat which sells its best players each year, current PSV head coach, Philip Cocu, is richly deserving of a mention, too. At the time of writing, his PSV team are still have the possibility of securing their presence in the Champions knock-out phase, an achievement which has eluded Dutch clubs since PSV themselves did it in 2006/07.

Perhaps another one to watch for the not-too-distant future is another Premier League star of the late nineties. Jaap Stam has been Ajax's defensive coach since 2013, and completed his UEFA coaching badges as recently as last month. He is widely believed to be hungry for a first managerial role of his own.

Though its admittedly hard to imagine five years into the future of football, lets try twenty-odd. The 2038/39 season will see Hasselbaink, de Boer, Cocu, Kluivert, Davids, Seedorf and Dijkhuizen all lingering around retirement age, will any combination of three be able to match the trophy haul of Van Gaal, Hiddink, and Advocaat? Or will the majority slip comfortably into punditry while following other interests? QPR fans will hope at least one man continues his early rise.
Posted by Glenn