The Curious Existence of AP Campionese

"And this is Campione d'Italia', she's the Italian comune in Switzerland, you know, she's an Italian enclave and exclave surrounded by Switzerland but still in the Province of Como, Lombardia, in the Swiss canton of Ticino". Introducing the small town of Campione d'Italia, is much like describing a distant relative at a very large family celebration. She's both vaguely recognisable, and completely unfamiliar. She has the same plump and contented face as aunty Giulia, yet she's definitely got the nose of grandpa Müller.

Though it shares a similar latitude to the Matterhorn, and the ski haven of Chamonix, it is very much an Italian town. Located on the shore of Lago di Lugano, and just twenty-eight kilometres from Como (seventy from Milano), yet its political and geographical borders render it completely surrounded by Switzerland.

Founded as recently as 1978, the local football team, AP Campionese, are the only Italian team (professional or amateur) to play in the Swiss football league system.

The area of Campione and its surroundings were always Italian. First the Romans, then Toto of Campione, then the Arch Bishop of Milan, the abbey of Sant'Ambrogio, and finally the Bishop of Como all claimed ownership up till the sixteenth century. Then, as a thank-you for support in the 'War of the Holy Leagues', Pope Julius II transferred possession to Switzerland. One condition of the transfer was that the running of the small town remain under the stewardship of the local abbey, thus placing the area in Switzerland and maintaining Italian rule. This existence was supported by a public vote in 1798, further referendums in the late 1800's, and later intervention by Mussolini. Italian unification in 1861 distanced Campione further, as all land west of the lake was designated as Swiss. In the 1930's, Mussolini added 'd'Italia' to the official name, and built some inevitably imposing and ornate city gates. Thus decided Campione's rather unique fate and borders, and they've remained unchanged and unchallenged ever since. Not that the 2300 residents have any need to change or challenge, they enjoy a unique set of benefits thanks to their situation. The enviable best of Switzerland and Italy. For example, the postal system is Swiss, and though its slightly more expensive than the Italian counterpart, stereotypes run true to make it more efficient and reliable. The police are Italian, yet fire services and medical care is Swiss. Swiss Francs are the official currency, yet the Euro is widely accepted. Since Ticino is an Italian-speaking canton of Switzerland, linguistic borders become blurred lines. Furthermore, its residents are exempt from tax thanks to the curious existence of Europe's biggest casino.

The Casino di Campione was originally opened in 1917, and quickly became something of a safe haven in the First World War. Evoking scenes reminiscent of early Bond movies, the casino became a meeting point for foreign diplomats, government officials, and military leaders. Most likely to the backdrop of clinking Martini glasses, sensitive information would change hands, and officials would turn a blind eye no matter whoever or whatever. If walls could talk, there'd surely be a historically provocative tale or two to tell. However, with those walls no demolished, and the new super casino now erected, those stories are lost forever. Now under ownership of the Italian government, the new casino opened in 2007. A local postcard-dominating art-deco structure designed by Swiss architect, Mario Bossa, it now boasts over fifty-five thousand square metres of gambling space spread over nine floors. A further three floors are underground parking. Despite this dominating presence, the people of Campione d'Italia remain sympathetic, mostly because the casino's income see's them free from that troublesome task of paying tax. Campione d'Italia is Europe's smallest tax haven. Switzerland, Italy, a casino with a murky history, and Bond is nowhere to be seen. Image from here.

Unlike another European tax haven four hundred kilometres to the south west, the local football team are decidedly low-key and low budget. Their home ground, Centro Sportivo Sciree, can be seen at the top of the above image. Its recently renovated main grandstand houses all three hundred and sixty of the stadium's seats. 3G training pitches occupy space behind one goal, and changing rooms and offices occupy space behind the opposite goal. Evergreens and conifers complete the quaint frame. However, as another slight anomaly, its what exists outside the frame which makes the Sciree such a stunning football venue. Carved into the foothills of the Swiss Alps, and with panoramic views of Lago di Lugano, there can't be many European football grounds more picturesque.

However, while AP Campionese might be high rollers in the postcard selling stakes, achievement on the pitch is more subdued. Currently, the team play their matches in the ninth and final tier of the Swiss Football system, namely the '5th Division of the Ticinese Football Federation'. To begin to appreciate their modest place in the pyramid, there are sixty-seven leagues hosting nearly seven hundred clubs of a similar standard across Switzerland. Essentially, its a meagre step up from pub football.

As can be expected, the majority of the team are young and hopeful, predominantly Italian and Swiss semi-professionals. The squads average age is twenty-four. As a reflection of increasingly modern and diverse Italy, the squad includes players from Ecuador, Poland, Portugal, and Turkey. A significant number of the squad are employed by the casino.

Historically, the team peaked in the 2006/07 season, when they nearly claimed a second successive promotion into the FTC second division. To put into context, even if they had won promotion, there were a further seven promotions between them and the  top flight Swiss Superliga. The current campaign is frozen, literally at the altitude of nearly three hundred metres, for a three month winter break. They signed off for the holidays on November 15th with a resounding three-nil victory against AS Arogno, which secured a relatively comfortable mid-table position, sixth in a twelve-team league.

Realistically, the team aren't going anywhere fast, but with views like that, there really is no need. 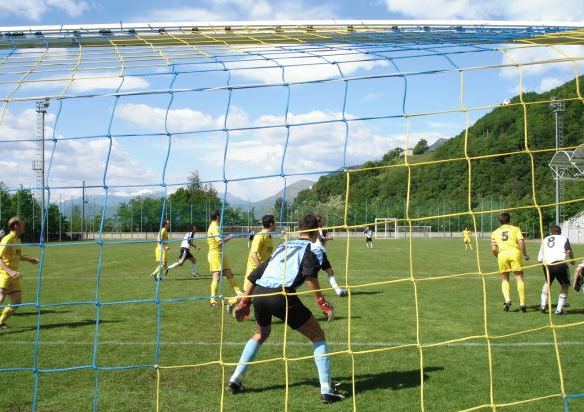 Kicking off the 2015/16 campaign. Image from here.
Posted by Glenn