We awoke to find Wigan pretty much as we left it; looking quite pleasant despite the constant drizzle, yet devoid of any people other than the ones in cars moving slowly to work. With little choice, we joined them.

The thing about passing through the north of England, is that it's simply depressing. Our route down the UK has been stunning in places, breathtaking in others, and all set to the back drop of quirky and interesting people. Ploughing on through this corridor of northern England made for none of those things. Geography gave us little choice in terms of a scenic route, so from Wigan we followed the rush hour through Warrington where the sheer number of cars gridlocked on the road, and the amount of glass along the side of the road, saw us resigned to a morning coffee stop at Costa. We're not usually ones for chain restaurants or cafes, but sometimes you gotta do what you gotta do. Refuelled, we joined the tow path alongside the St Helen's Canal provided some respite. All the way down this 12km path, buried on overgrowth, running parallel to what was one of the most important canals in the country, and we didn't see a soul. When the overgrowth dispersed, there was the treat of a view of the River Mersey, all bleak and painful. Tourist info displays tried to pay tribute to a bygone era of driving industry and integrity, but even they had in turn become a shrine to crap and lazy graffitti. 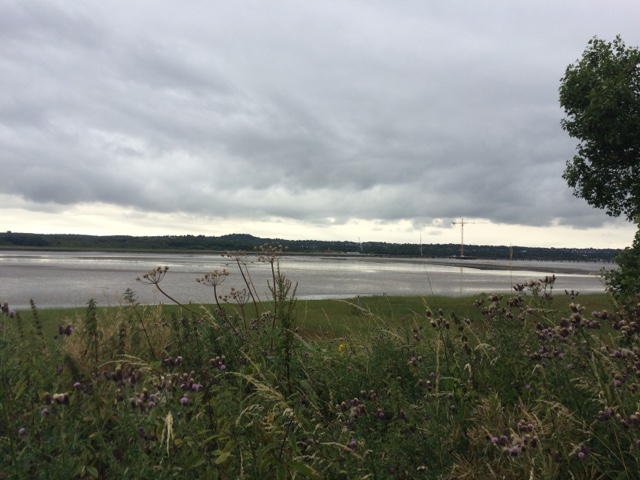 As we came into Widnes, we were thrown back into 'civilisation'. We joined the A533, our only option of crossing the River Mersey into Runcorn, with shouts of support from white van men and chavs in a butchered Fiat Punto such as, "what the fuck are you doing!?", and "use the fucking bike lanes!". I flipped my middle finger and pedalled stoically on.

We managed to plot a slightly more tranquil route through, and more importantly, out of Runcorn, weaving up and down Beachwood Avenue till we met the Old Chester Road. Since the M56 has taken most of the traffic away, it was good to feel like the King of the road again. We even got our tyres pumped up and one of 7 bike shops counted between Frodsham and Chester. Into Chester for a lunch fit for two old dames; roasted ham sandwiches (cut into triangles), a pot of tea with dainty flowery cups and saucers, and a carrot cake.

From Chester we followed quiet B roads heading to Shrewsbury which should have seen some thoroughly enjoyable cycling. However, somewhere between Shocklach and Threapwood on the B5069, something curious happened. First, someone filled my thighs with lead which put a terrible strain on my knee and ankle tendons, which in turn, screamed blue murder at me for partaking in such a ridiculous undertaking. 'Seriously, it's the summer holiday, we could be on a beach drinking cocktails', was the pre-watershed summary of what they were screaming. Secondly, someone, probably the same person, filled my backpack with concrete, and smothered the road in superglue. Going got tough, and not even a gluttonous stop for lucozade and chocolate could raise physical or mental morale. Every force down on the pedals brought some kind of agony. Physical pain from knees and ankles, and mental pain from the very realistic, thought temporary, questions of what the hell we were thinking. Soon after leaving Wem on the A528, I blacked out. I awoke in the 16th century, laying on a firm bed with a stone cold breeze swirling around me. Centuries old antiques surrounded me, and my luggage was strewn across an antique luggage chest. Floorboards creaked and curved, as did the original wooden beams across the walls and ceilings. Somehow, we'd arrived in Shrewsbury, and found our way to the evenings rather quirky Air B&B location. 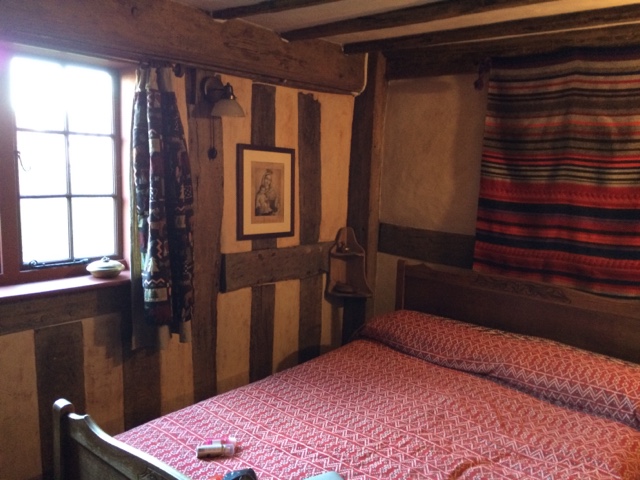